Andrei Șerbescu (1977) lives and works in Bucharest and is one of the two partners who founded ADNBA architecture office in 2003 (www.adnba.ro). Since 2002, Andrei Șerbescu has been teaching within the design studios of the Bucharest’s University of Architecture and Urbanism Ion Mincu, having completed his PhD in 2011 with a thesis on vernacular architecture in nowadays Romania.
ADNBA’s work has been five times nominated for the European Prize for Contemporary Architecture Mies van der Rohe Awards, for which it was also shortlisted within the last 40 projects in 2015. In the same year, ADNBA was also the winner of the Milan Zlokovic award for the best architectural achievement in the Balkan Region, while a year before it was a finalist at the World of Architecture Festival Awards and the winner of the Romanian National Architecture Biennale and of the Bucharest Architecture Annual – a prize ADNBA won again in 2017. In 2016, the office won the first prize at the Romanian Building Awards and the East Centric Architecture Triennale Award.
The firm’s work has been published in several magazines and books, out of which the latest book („Dwelling together. 6 apartment buildings by ADNBA”, 2014) focuses on contemporary collective housing in Bucharest. The same topic was the starting point for ADNBA’s Hilariopolis, the installation presented within the main exhibition at the Venice Architecture Biennale in 2016.

One of the most important and problematic aspects of nowadays Bucharest is the fast densification of the central area. While we believe that density can, and many times must be seen as a form of sustainability, we also admit that the often fragile relationship between habitation within an old neighborhood and the increase of density could many times alter the place and reduce its existing qualities.

Our project is looking for an appropriate answer to this problem. It tries to mediate between different sizes and densities, in a quite central neighborhood characterized by small streets, long, narrow plots and a puzzle of old and new buildings of all types and scales. The building searches to preserve, at its own scale, the porosity and “profoundness” of the deep, narrow plots, while also trying to capture part of the “collage”-like appearance of the surroundings.

Challenging the understanding of what we consider to be suitable for living in the center of the contemporary city, we try to complement density and rationality by diversity (in size and typology), common space, conjunction between indoor and outdoor space, and flexibility. This is how, in the end, we create a building consisting of 77 residential units, out of which more than 50 are different in typology.

Ever since its completion (in 2014), the project has received several prizes and nominations in both national and international competitions and architectural events that brought its recognition. 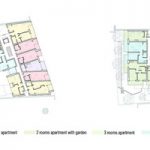 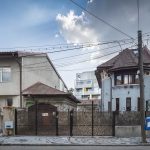 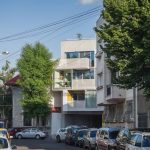 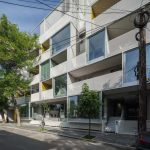 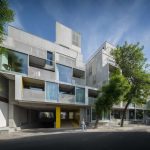 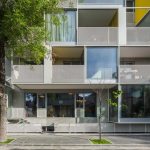 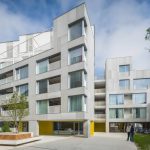 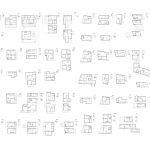 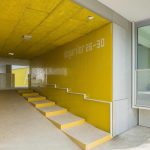 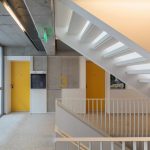 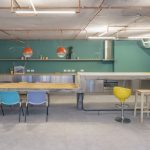 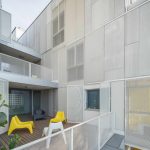 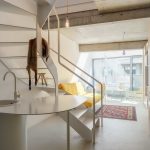 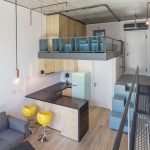 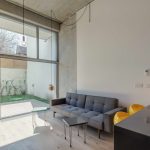 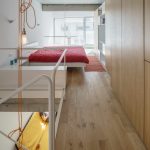